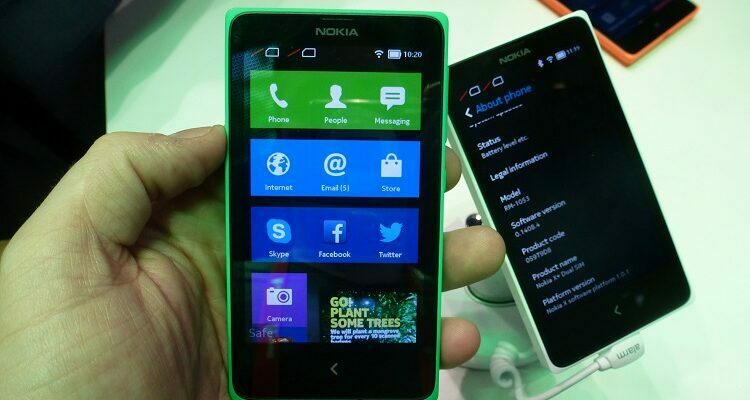 Nokia Normandy, Nokia’s first Android phone got a final look at last. After so many leaked images that included engineering prototypes & UI, Nokia is all set to release their first Android smartphone running on Android 4.4 Kitkat soon. MWC 2014 is near, and we really don’t know, what Nokia is planning actually? We already have given you up to date news about Normandy. If the sources are correct then Nokia Normandy will target emerging markets like India as an idea of dual SIM is depicting the fact here. Top leakster @evleaks has always given the concrete proofs to murmurs about Nokia Normandy and become the reliable source for getting all such news right from their twitter account.

Nokia Normandy final look – Normandy is coming up with different colors that include black,white, green, red, blue, yellow. Seems like Normandy is following Asha series UI. Many tech giants named it A110 model number as per the rumors, however, as we showed you Nokia Normandy UI earlier, the time was depicting 1045 hinting its model number to be 1045. But we can’t predict now, as it is not officially announced. If you look at the home screen as depicted in the final look of Normandy, you will get to know, that Nokia has again stuck to windows live tiles. Hence giving you a feel that it’s indeed a Nokia product! Nokia also revealed Normandy’s engineering prototype a few days ago.

Specifications of Nokia Normandy or A110 –

RAM, storage and battery specifications are yet to be revealed by Nokia’s official announcements.

If you look more precisely at the screenshot you will get to know that Nokia is also working on its own app store. So, the company has also hired some android developers to make apps ware for their upcoming Android phone series. Also, it has been come into our knowledge that Nokia may replace current Asha series with more powerful Android phone series with low prices. Well, we are eager to hear more about Nokia’s first android smartphone – Normandy. Expected price of Normandy will be under 15000 in India, if it is going to be a low price smartphone.